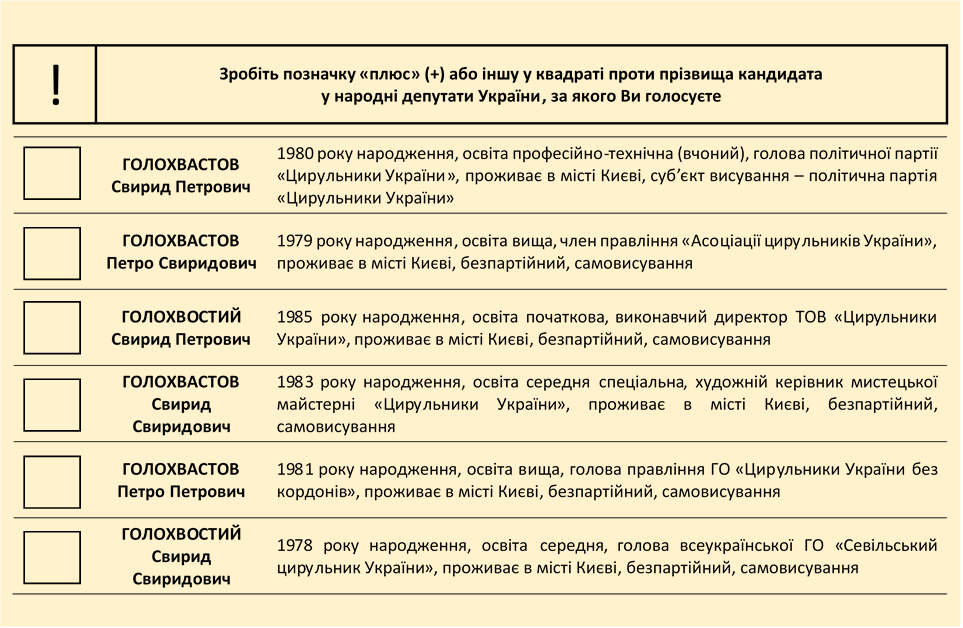 A bill was submitted to the Verkhovna Rada of Ukraine to counteract the use of “same-name candidates” during elections. In the United States, a “clone” all but get 20 years in prison.

A week ago, a draft law initiated by 74 MPs, including the Speaker, was registered with the Verkhovna Rada of Ukraine, “On amending the Electoral Code of Ukraine to prevent the use of manipulative technologies aimed at misleading voters” (#6046). The goal of the bill is to ensure that voters are informed about candidates who have changed their last and/or first and patronymic names within five years before being nominated to run for election.

The document’s authors suggest making a number of changes in the Electoral Code so that any formal sources of information about candidates as well as ballots contained all their previous names – of course if there has been such a change of name. Moreover, it is suggested that changes in the information about candidates would be prohibited after the Central Election Commission approved the ballot text.

The explanatory note for the bill reads that it was drafted because of the necessity to implement a legal mechanism to fight the “dirty technology” – the use of “same-name candidates.” According to the data of the Committee of Voters of Ukraine, at the October 2020 local elections, running for mayors of 24 cities were “clones,” i.e., candidates with the same surnames. The Civil Network OPORA called the scale of using this technology during the 2019 snap election unprecedented – candidates with identical last and first names were running in 24 single-member constituencies.

However, another “cloning” technology has dropped out from the bill scope, that for the names of organizations candidates are affiliated with. The same report of OPORA points out that, during the 2019 election, candidates in 93 single-member constituencies indicated in their bios their affiliation with organizations that had names very similar to those of political parties also participating in the election (although they did not run from these parties).

Manipulating with candidates’ names is not Ukraine’s invention. In August 2021 in the United States, some Alex Rodriguez got three years’ probation, including a year on house arrest with a GPS monitor. He had faced up to 20 years in prison but pleaded guilty and started cooperating with the investigation.

No-party Alex Rodriguez was running for Florida Senate in Senate District 37. The 6,400 ballots he collected were not enough to become a senator but sufficed for then-Democratic Sen. José Javier Rodríguez to lose his seat, coming short of just 23 votes (of about 215,000 cast). As a result, GOP candidate Ileana Garcia became the winner.

The investigation alleges that the clone scheme had been set up by former GOP Sen. Frank Artiles, who paid Alex more than $55,000, including $10,900 to his formal campaign fund.