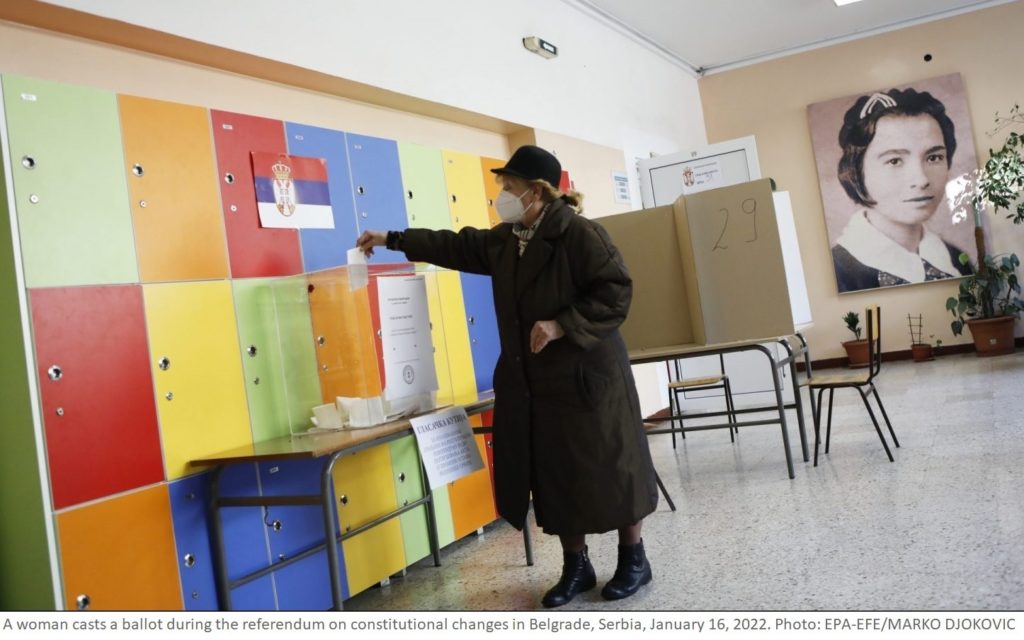 Against the urgings of many opposition parties, most Serbian voters on Sunday backed proposed changes to the constitution – announced as a way towards the depoliticization of the judiciary, which the EU has said it wishes to see.

Serbian citizens voted to change the country’s constitution and accept a judicial reform package, with 60.48 percent voters saying “Yes” to the proposals in Sunday’s referendum, according to the first results on Sunday night.

Around 39.52 percent of voters chose the “No” option. Referendums on constitutional changes do not have any required threshold in Serbia. According to the latest official information, around 30 percent of voters went to the polls.

Serbian president Aleksandar Vucic, who announced the results, said that some 400,000 people more, voted for the “Yes” option, compared to those who voted “No”.

“I congratulate the citizens of Serbia, they voted for the constitutional changes, I congratulate everyone who voted, both in favor and against,” Vucic told media.

Earlier on Sunday, Rasa Nedeljkov, from the Belgrade-based NGO CRTA, a group that observed the voting, said that their general conclusion is the electoral boards were “rather unprepared” for the election process, which he said could lead to “various potential problems”.

He added that CRTA had to withdraw observers from one polling station because they were threatened by “unauthorized persons”.

Serbs in Kosovo, Serbia’s former province whose independence Serbia does not recognize, were not allowed to vote at polling stations across the entire country, like in previous elections, but were only allowed to do so in Pristina. Serbia’s State Electoral Commission said on Saturday evening that Serbs from Kosovo will be allowed to vote in four towns in other parts of Serbia.

Four members of each council will be so-called “prominent lawyers”, chosen by parliament. Unlike now, the justice minister will be a member only of the prosecutorial council, while representatives of parliament will not be members of either council anymore.

Experts said the changes were a needed step – but were not enough to guarantee that the Serbian judiciary will be independent of political influence.

Most opposition parties and some professionals urged a “No” vote in the referendum, saying that there was not enough legitimacy when parliament – with barely any opposition parties present – adopted the amendments. They insist there is still a real possibility of political influence on the judiciary.

Serbia’s 2006 constitution was adopted at a time of high tension over the future of Kosovo, a former Serbian province that was then a ward of the United Nations, but pushing for independence.

The constitution affirmed Serbia’s claim to Kosovo as an integral and inviolable part of its territory, despite which Kosovo declared independence in 2008 and has since been recognized by most EU states.