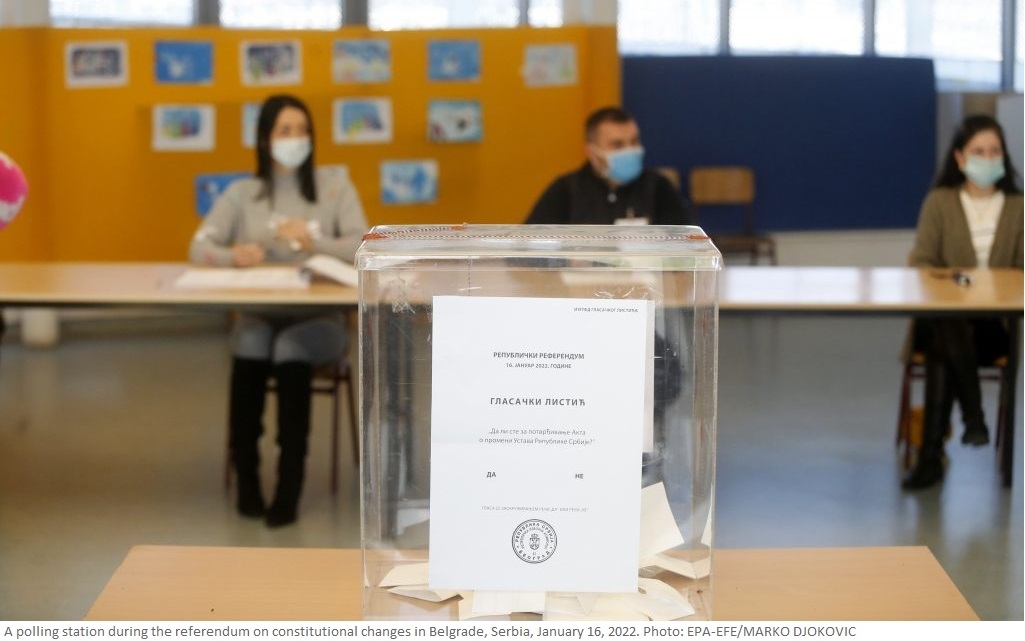 While EU officials have welcomed the results of Serbia’s referendum on constitutional changes, opposition parties have voiced suspicions about rigging – although the fact that several cities voted ‘No’ to the government has given them optimism.

Serbia’s referendum results in which citizens backed changes to the country’s constitution and a judicial reform package in a referendum have drawn different reactions at home and abroad.

While EU officials have praised the result, the opposition has raised doubts, although the fact that some major cities, including the capital Belgrade, voted against the changes has given it optimism.

European Commissioner for Enlargement Oliver Varhelji stated on Twitter that Serbian voters had “supported the change of the constitution to reinforce judicial independence.”

“I welcome this important step & commitment to #EU path. We will continue to work with Serbian authorities on ambitious reform agenda, advancing EU integration,” Varhelji wrote on Twitter.

Similar messages came from the EP Rapporteur for Serbia, Vladimir Bilchik, who said: “This news moves Serbia another step forward on its EU path.”

Serbia’s opposition parties disagreed, and supported a “No” vote or a boycott, claiming that the changes were purely cosmetic and that the ruling Serbian Progressive Party still has numerous ways to influence the judiciary.

Part of the opposition said it suspected the referendum results were rigged, including the right-wing Dveri movement and “Enough is enough” (“Dosta je bilo”), which noted that some of the largest cities voted against.

Bosko Obradovic, leader of Dveri, accused President Aleksandar Vucic, who announced the results before the state election commission, RIK, of having falsified the result, for having claimed the turnout was 101.01 percent.

“Who is Vucic to announce the results of the referendum and why did he do it before the Election Commission? He was in great panic and trouble, so he failed to add up the three digits,” said Obradovic, adding that it was strange that several major cities voted against – but that a majority was still in favor of the changes.

According to preliminary results, in the capital, Belgrade 54 percent of people voted against the constitutional changes. In two other major cities, Nis in the south and Novi Sad in the north, around 53 percent of voters also said “No” to the proposal.

The opposition was again disunited when it came to boycotting the referendum or voting against it. The largest opposition option, the Party of Freedom and Justice, led by Belgrade’s former mayor, Dragan Djilas, called for a boycott. The People’s Party led by former Foreign Minister Vuk Jeremic did not have a united stand, while only the green-left “Ne davimo Beograd” movement had an active “No” campaign.

The ruling party, known for its disciplined voting base, did not campaign strongly either, despite the public support coming from Vucic and Prime Minister Ana Brnabic.

Pavle Grbovic, leader of the opposition “Movement of Free Citizens”, PSG, which called for a vote against the changes, said on Monday that the low turnout shows that the SNS cannot count on the votes given to it by public opinion polls.

“The SNS still has the greatest support, but it does not mean that they are untouchable,” the PSG leader said.

According to the results of the RIK, only 30 percent of people voted, with 59.71 percent backing the changes and 39.26 percent voting against.

The Belgrade-based NGO CRTA, a group that observed the voting, said that the electoral boards seemed “rather unprepared” for the election process, which could lead to “various potential problems”. According to CRTA, irregularities of various types were noted in 4 percent of polling stations.

The NGO stressed also that it had to withdraw observers from one polling station because they were threatened by “unauthorized persons”.