“Poland is playing with fire”: the law primacy controversy with the EU is nearing a dangerous line 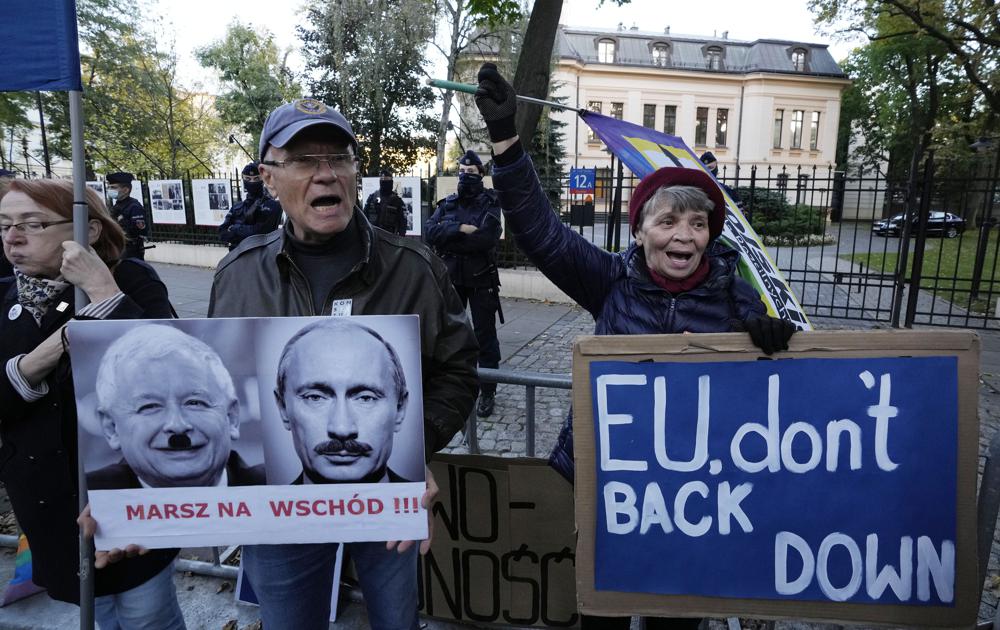 Poland’s Constitutional Tribunal has decided that the Treaty on European Union provisions that make EU law superior to that of a member state are incompatible with the Polish Constitution. Although the position in the confrontation with the EU of the Poles themselves is far from being unanimous, this CT decision was officially supported by Hungary.

On Oct. 7, 2021, the Constitutional Tribunal (CT) of Poland ruled that certain provisions of the Treaty on European Union, namely those on the primacy of EU law, are inconsistent with the Constitution of the Republic of Poland. The ruling was supported by 12 of 14 CT judges at the last in the series of hearings on a motion by Prime Minister Mateusz Morawiecki and in the presence of Poland’s president, MPs, foreign minister, public prosecutor-general, and ombudsman.

Explaining the motives behind this decision, the CT judge rapporteur, Bartłomiej Sochański, said inter alia that the volume of competences transferred to the EU by member states has been fundamentally regulated in the treaties. “There is neither the organization nor the form of judiciary among those competences,” he pointed out.

A day before, the Grand Chamber of the Court of Justice of the European Union (CJEU) delivered its judgment in case C‑487/19 over the transfer of W.Ż., a Polish judge, without his/her consent from one division of the Regional Court of K., Poland, to another by an order of the president of that Regional Court and the refusal of Poland’s National Council of the Judiciary to adjudicate on the challenge brought by W.Ż. Based on TEU Art. 19(1) and the principle of the primacy of EU law, the CJEU ruled that “transferring a judge without consent from one court to another or another division of the same court can undermine the principles of irremovability and independence of judges,” as European Court of Human Rights Judge Anna Yudkivska worded it in her Facebook post. “According to the Court, such transfers can be a way of exercising control over the contents of judicial decisions since they are likely to have not only an impact on the volume of cases provided to judges and the review of the cases but also significant consequences for the lives and careers of these persons, such consequences being similar to the consequences of a disciplinary penalty,” the Ukrainian lawyer wrote.

Mateusz Morawiecki applied to the CT after the European Commission, on Mar. 31, 2021, decided to refer Poland to the CJEU regarding the law on the judiciary of Dec. 20, 2019, which entered into force on Feb. 14, 2020, and asked the CJEU to order interim measures until it had issued a final judgment in the case. According to the Commission, the law undermined the independence of Polish judges and was incompatible with the primacy of EU law. Moreover, the law prevented Polish courts, including by using disciplinary proceedings, from directly applying certain provisions of EU law protecting judicial independence and from putting references for preliminary rulings on such questions to the Court of Justice.

The Constitutional Tribunal set to review the Polish prime minister’s application on July 13, and as soon as the next day, the CJEU issued an order obligating Poland to immediately suspend its national provisions on the Disciplinary Chamber. The CT responded immediately then too, having ruled the same day that certain provisions of the Treaty on the European Union and the Treaty on the Functioning of the European Union – “insofar as the Court of Justice of the European Union ultra vires imposes obligations on the Republic of Poland as an EU Member State, by prescribing interim measures pertaining to the organizational structure and functioning of Polish courts and to the mode of proceedings before those courts” – were inconsistent with the Constitution of the Republic of Poland.

In one more day, on July 15, in another but closely related case, the CJEU adjudged that the new disciplinary regime applicable to judges in Poland was incompatible with EU law and, in adopting this regime, Poland had failed to fulfill its obligations under EU law.

(For more details of the over-four-year-long history of EU/Poland confrontation on the field of law see The judicial war for Poland’s Supreme Court Disciplinary Chamber: with whom will the final word rest?)

Having learned about the CT ruling, the vice prime minister of Poland and the chairman of its ruling party Law and Justice (PiS), Jarosław Kaczyński, said he would have been very worried had there been another decision. “It would have meant that Poland was not a sovereign state and there was no democracy in Poland because it lacked citizens.”

However, far from all the Poles share the PiS leader’s opinion. TVN24 also published critical comments by Polish senators.

Senate Speaker Tomasz Grodzki said “the senators of the democratic majority are moved, shocked by the verdict of the so-called Constitutional Tribunal… The Constitution is our highest law, and its article 91(2) says that international agreements signed by Poland take precedence over Polish law.” He also called the CT decision “a very serious step away from the principles of legislation and justice, and the rule of law, which are standards in the European Union.”

Supporters of the EU law supremacy also gathered to protest in front of the Constitution Tribunal in Warsaw during the last hearing of Morawiecki’s application (photo above: AP Photo/Czarek Sokolowski).

Official support for the Polish CT ruling came from another populists-governed country, Hungary, which called on European Union institutions “to respect member states’ sovereignty and national identity.” According to a Reuters report, Hungary’s Prime Minister Viktor Orban signed a government decree welcoming the ruling by Poland’s Constitutional Tribunal. “The primacy of EU law can only apply in those areas where the EU has powers, the framework for this had been set out in the EU’s treaties,” Reuters cited the Hungarian decree as saying.

Another Reuters story deals with that the CT decision has plunged the EU into an existential crisis, increasing fears among EU policymakers and many Poles that Poland could eventually leave the bloc. A “deep concern” was expressed by EC President Ursula von der Leyen, who said that the EU executive she leads would do all in its power to ensure the primacy of EU law. She said the EU’s 450 million citizens and its businesses need legal certainty, and the Commission would carry out a swift analysis to decide its next steps.

Reuters also cited Luxembourg’s Foreign Minister Jean Asselborn as saying, “We have to state clearly that this government in Poland is playing with fire. The primacy of European law is essential for the integration of Europe and living together in Europe. If this principle is broken, Europe as we know it, as it has been built with the Rome treaties, will cease to exist.”