Just-launched Center for Constitutional Design presented at a press conference 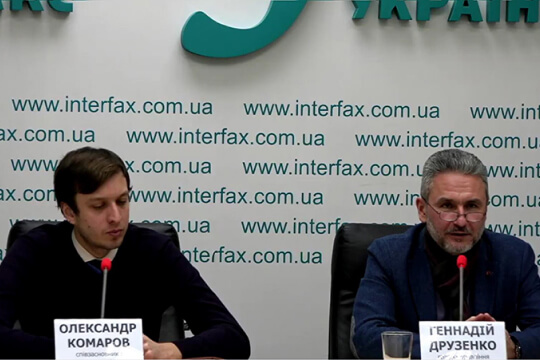 The Interfax-Ukraine news agency hosted today a press conference titled “The Center for Constitutional Design as a Laboratory to Look for a Way Out of the Constitutional Crisis in Ukraine.” CCD founders presented the newly established NGO and said they hope it will become an “embryo of a Ukrainian analogue of the famous Philadelphia Convention that created the U.S. Constitution 234 years ago.”

The third founder, Volodymyr Kozlenko, Ph.D., could not attend. He is an attorney and the managing partner at AC Crowe Ukraine as well as the chairman of the All-Ukrainian Civic Platform “New Country” and a member of the Council on Judicial Reform.

The CCD founders also mentioned other systemic unbalances in the current constitutional architecture of the state, including conflicts between the central and local governments; the status of the Autonomous Republic of Crimea; the too powerful presidency that is splitting the country; the mismatch between economic rights and social guarantees proclaimed by the Constitution and the actual budgetary capacities; and so on.

The only way to lawfully break this dead-lock is to carry out a comprehensive constitutional reform through a full-scale inclusive constitutional process, according to the lawyers. They said the CCD, established with the purpose to facilitate the process, will focus on the following activities among other things:

The CCD founders also announced that they had already reached an agreement on collaboration under their project with two partners, namely Prof. David Clair Williams of the Indiana University Bloomington who heads the Center for Constitutional Democracy and Prof. Tom Ginsburg of the University of Chicago who is one of the leaders of the Comparative Constitution Project.