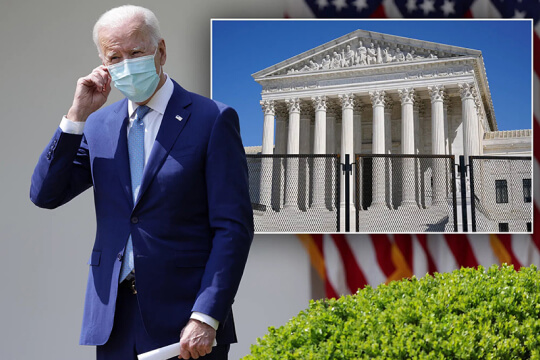 POTUS’s approach should be an example for Zelensky, says CCD Board Chair

On Apr. 9, the President of the United States Joe Biden issued an executive order establishing a Presidential Commission on the Supreme Court of the United States. “This action is part of the Administration’s commitment to closely study measures to improve the federal judiciary, including those that would expand access to the court system,” according to a statement by the White House.

Up to 36 members of the Commission, including “distinguished constitutional scholars, retired members of the Federal judiciary, or other individuals having experience with and knowledge of the Federal judiciary and the Supreme Court” will work pro bono for 180 days. “The Commission’s purpose is to provide an analysis of the principal arguments in the contemporary public debate for and against Supreme Court reform, including an appraisal of the merits and legality of particular reform proposals. The topics it will examine include the genesis of the reform debate; the Court’s role in the Constitutional system; the length of service and turnover of justices on the Court; the membership and size of the Court; and the Court’s case selection, rules, and practices,” the statement reads.

On the eve of the 2020 election, President Trump appointed Republicans-supported Amy Coney Barrett as a Justice to replace Ruth Bader Ginsburg, who died in September, despite protests from Democrats against filling the vacancy in the presidential election year. (In 2016, the Senate Republican majority had refused to consider President Barack Obama’s nomination of Merrick Garland ten months before the end of his presidency.) As a result, the Court now has a conservative majority at a six-to-three margin and is able to kill any reform initiative of Democrats.

During his presidential campaign in 2020, Joe Biden neither supported nor discarded the idea voiced by some other candidates other to expand the Court, promising instead to create a bipartisan commission to examine the possibility of expansion or limiting the term in office for Justices. 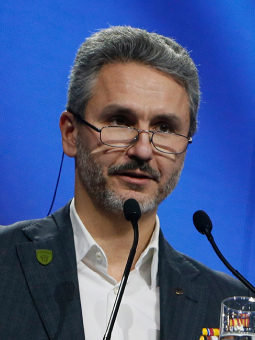 A comment by CCD Cofounder & Chairman of the Board Gennadiy Druzenko

Ukraine’s President Volodymyr Zelensky once called Donald Trump his “great teacher.” It seems he actually learned from the ex-President of the United States how to be inconsistent, reflective and impulsive. And since Trump has made it into American history as a president that left the White House with the historic low in the level of Americans’ satisfaction with his “accomplishments” in the office plus two incomplete impeachments, I hope that Zelensky isn’t too eager to go the way of his “great teacher.” And it would be good if he began learning how to respond to strategic challenges from the incumbent U.S. President rather than from the latter’s predecessor.

Ironically, one of the problems that Biden has inherited from the former Administration painfully reminds Zelensky’s problem with the Constitutional Court of Ukraine. Trump was lucky to be able to appoint three U.S. Supreme Court justices in the four years of his presidency. (In the United States, the Supreme Court also has constitutional jurisdiction, which means that it has the power to review congressional and presidential acts for their compliance with the U.S. Constitution.) With the appointment of Amy Coney Barrett as a Justice in the fall of 2020, the Court formed a staunch conservative majority of six against three. Therefore, the current Court composition may become the main opponent to and a brake for the ambitious reforms that the Democratic President intends to implement with the support of the Democratic majority in both houses of Congress.

The situation reminds us of the 1930-s when the conservative Supreme Court repeatedly recognized key acts of Franklin Delano Roosevelt’s New Deal as unconstitutional. A difference is that America now is not in such a deep crisis as was the Great Depression, Biden in his 100 days of the presidency has managed to do just a handful of what FDR did in his similar period, and sitting on the Supreme Court today are not “nine old men,” as the Democratic press called them 90 years ago, but six males and three females of who three Justices are below 60 years of age and Barrett is even below 50 – generally seen as quite a young age for Justices.

So, what does Biden do when he faces more than real prospects that his ambitious reforms might smash against the conservative worldview of the Court majority? No, he doesn’t unmake decisions of his predecessors on the appointment of conservative justices. Neither he orders a U.S. secret service to keep them out of their offices. Nor does he urge Congress to pass a bill to totally reload the country’s main court.

Instead, he forms a bipartisan commission to elaborate proposals on a Court reform. The commission is bipartisan because this reform is too important to fall a victim to an inter-party fight.

Why not follow the example of Joe Biden, and before brandishing the sword of your unconstitutional decrees, which already look like an attempt at usurpation, form a commission that would at least have explained to you the purpose of the Constitutional Court, its genesis, as well as what models and ways are available in the world for resolving the problem that you personally and Ukraine as a whole face because of the absurd 2016 reform of the Constitutional Court?